I help you get unscrambled by honoring your uniqueness and helping you shift your beliefs.

Because for too long people have been told that they cause the problems in their lives. That any issues are of their own making. And sure, there are things that we could do differently, ways that we can look at things. There are lessons to be learned, but the world in which I live also is one where we are not punished for being scrambled, and we are not damned because of our brain chemistry. The world I live in is one where it is possible to dig deep, find our beliefs, and change them–change ourselves–for the better. 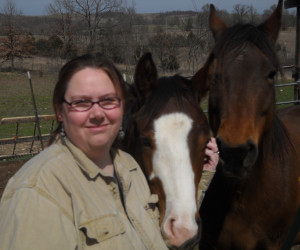 My story involves a toxic job, some dreams, a mother who became disabled, and my husband’s heart attack. For fifteen years I worked at the corporate job. I was “super woman”. I was the “perfect” one working a full-time job that made me almost $50k a year, working on my writing career and publishing books, taking care of mom, and when my husband had a heart attack, taking care of him too. Then, I had a “fuck it” moment. A moment of bad judgement that nearly cost me my job. That I’d screwed up so badly, one in a long line of many my mind told me, hit me hard. I spent two weeks in stress-induced hives and ended up with fibromyalgia. My body decided to punish me because that’s what I thought I deserved.

Yet, I kept working, eventually moving to the graveyard shift because my boss had washed his hands of me. I endured bullying, harassment, and violations of federal law with my employer–still I hung in there. Until I couldn’t because I got laid off.

Getting laid off saved my life.

Because by that time my fibromyalgia was in full flare, with no medical help, and my depression was making me suicidal. Yet no one knew the depth of my pain.

Getting laid off freed me. Suddenly I had a chance to ask myself. What do I want? What do I really want to do now that I’m not “stuck” here?

And I know. Oh yes, I knew. So I packed up everything I owned and moved to the Ozarks with my husband and my 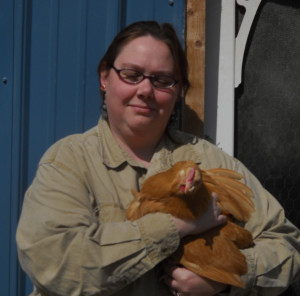 mom to start our life anew. To create the homesteading dream we’d always dreamed about. In January 2013 we arrived in the Ozarks. And I won’t lie. It was harder than hell. My old beliefs were still there and they were doing a number on me. But I changed them. I got unscrambled.

I want to help you get unscrambled too.

And maybe share a bit about my chickens, the cats, and everyone else at the homestead, too. 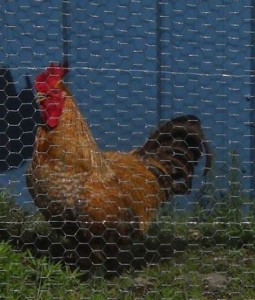 Red’s story began in the hell that was my life after the move. Chickens had been my dream. I wanted to live somewhere where I could have chickens. So I bought red at an auction in a batch of birds I thought were all hens. I had purchased 13 chickens. I had no idea how destructive raccoons could be until Red was the only one left.

I went to extraordinary lengths to save Red’s life. I would have even if I’d known he was a rooster, but I thought he was a hen. I still had hopes for eggs. For the entire summer, I kept him alive, and in the fall of 2013, I put him in a newly built chicken run. Better, but not quite right. The spring of 2014 brought a brand new chicken house and more chicks. He lived with his harem of 10 hens.

Sadly, in the summer of 2015 Red lost his life to a raccoon along with Buffy the special needs hen pictured above. I miss him.

As your Farm-To-Table Intuitive Foodie Coach, I bring my love of farm fresh foods (and chickens!) to your table so you can ignore the "should"s and what "they say" about food in order to feel better about what you eat and use your intuition to guide your health.

I'm a strong disability advocate who believes that you should eat what makes your body feel good. We're unique, and so is the food that we need. So let's cut through the crap and quit stressing over what we are eating. Let's find joy in food again. After all, food happens!

What’s Next With Food Happens?

You may have noticed that there haven’t been many new episodes of Food Happens lately, so I wanted to give you an update on where the podcast stands right now. First of all, Food Happens will NOT be going away. I do plan on resuming at some time in the future. Right now we’re on […]

Because I want to share some of my favorite resources with you.

Get local eggs. Search for farmers near you by visiting Local Hens. Just click on the image below.